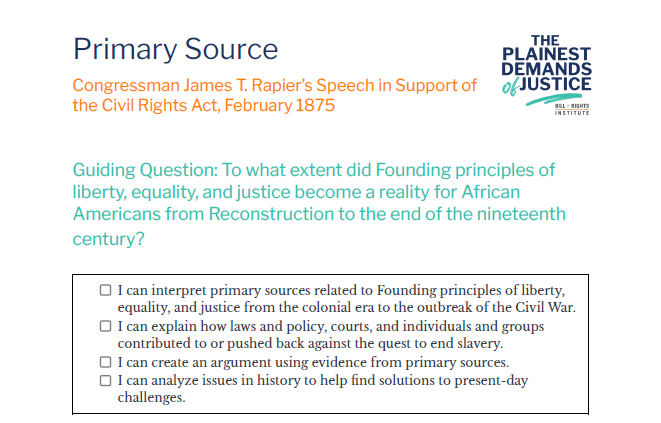 Like Congressman Robert B. Elliott before him, Congressman James T. Rapier of Alabama also spoke eloquently in favor of the Civil Rights Act. Rapier earned a reputation as a diplomatic legislator and outstanding orator in the 43rd Congress, where he focused his attention on the passage of the civil rights bill. His work for equal rights for African Americans earned him repeated death threats from the Ku Klux Klan.

This is the legitimate conclusion of the argument, that the Negro is not a man and is not entitled to all the public rights common to other men, and you cannot escape it. But when I press my claims I am asked, “Is it good policy?” My answer is, “Policy is out of the question; it has nothing to do with it; that you can have no policy in dealing with your citizens; that there must be one law for all; that in this case justice is the only standard to be used, and you can no more divide justice than you can divide Deity.”