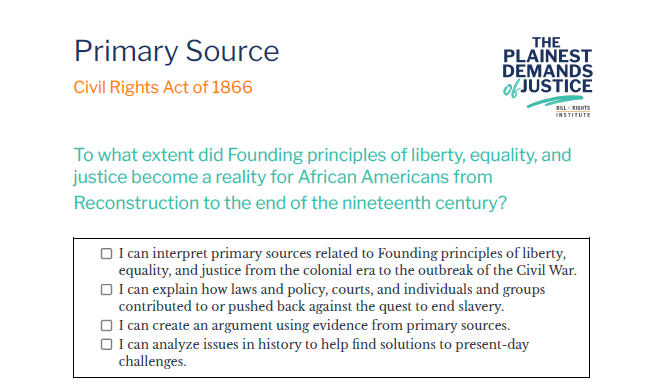 The Civil Rights Act of 1866 was adopted largely in response to the first round of Black Codes, such as those seen in Document 4. This bill was the first time federal law defined citizenship and guaranteed “equal benefit of all laws.” The bill was vetoed by President Andrew Johnson, but Congress secured a two-thirds majority in both the House and Senate to override his veto.

Be it enacted by the Senate and House of Representatives of the United States of America in Congress assembled, That all persons born in the United States and not subject to any foreign power, excluding Indians not taxed, are hereby declared to be citizens of the United States; and such citizens, of every race and color, without regard to any previous condition of slavery or involuntary servitude, except as a punishment for crime whereof the party shall have been duly convicted, shall have the same right, in every State and Territory in the United States, to make and enforce contracts, to sue, be parties, and give evidence, to inherit, purchase, lease, sell, hold, and convey [transfer property] real and personal property, and to full and equal benefit of all laws and proceedings for the security of person and property, as is enjoyed by white citizens, and shall be subject to like punishment, pains, and penalties, and to none other, any law, statute, ordinance, regulation, or custom, to the contrary notwithstanding.