For Black Americans taking part in the Great Migration, migrating north brought economic and political advantages, but it did not bring safety or equal protection under the law promised by the Fourteenth Amendment. Most migrants crowded into segregated neighborhoods and faced dire consequences if they ventured into a white neighborhood. The Chicago race riot of 1919 was one of a large number of riots that occurred in various cities that year. It began when a young Black boy drifted into the white section of a segregated beach on Lake Michigan. A white man on the beach began throwing rocks at him. The boy eventually drowned, but police refused to arrest the man who threw rocks. A crowd of African Americans gathered, and when one fired at the police who surrounded them, the police shot and killed him. By 9:00 p.m. that night, white gangs were roaming the Black neighborhood, beating, stabbing, and terrorizing Black Americans. The riots continued for 10 days. In the end, 23 Blacks and 15 whites had died, and 537 people had been injured. One Black Chicago minister lamented, “The Negro has longings to better his condition. . . . He asks the right to work and earn a living without molestation. He asks the equal protection of the laws and that no indignity be put upon him because of his color.” 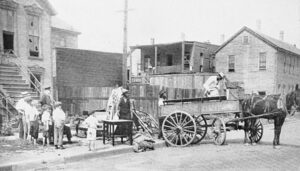 Blacks under the protection of police leaving a wrecked house in the riot zone by the Chicago Commission on Race Relations, 1922