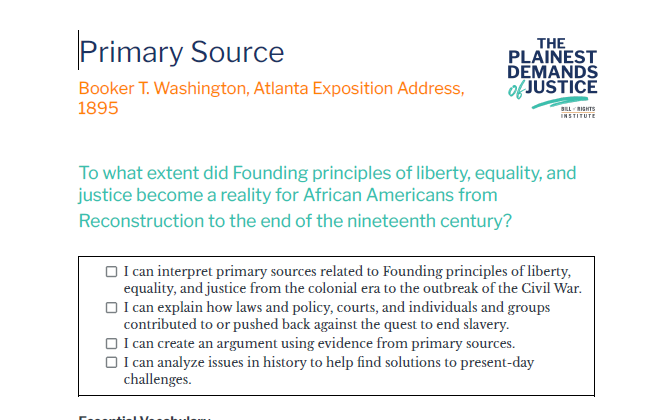 Booker. T. Washington was born enslaved in Virginia. He learned to read and write at a Freedmen’s Bureau school and attended Hampton Institute. A noted leader of the African American community, he was invited to speak at the opening ceremonies of the Atlanta Cotton States and the International Exposition, which was held to demonstrate and encourage economic growth in the South. He spoke before a racially mixed audience and highlighted his view of achieving racial progress through vocational education and constant work to improve each person’s own condition. While many Black leaders initially praised Washington’s speech, it became controversial in the ensuing decades. Critics of Washington argued that he did not do enough to directly challenge white supremacy and was too deferential to whites.

To those of my race who depend on bettering their condition in a foreign land, or who underestimate the importance of cultivating friendly relations with the Southern white man, who is their next door neighbor, I would say: “Cast down your bucket where you are” — cast it down in making friends in every manly way of the people of all races by whom we are surrounded. Cast it down in agriculture, mechanics, in commerce, in domestic service, and in the professions. . . Our greatest danger is, that in the great leap from slavery to freedom we may overlook the fact that the masses of us are to live by the productions of our hands, and fail to keep in mind that we shall prosper in proportion as we learn to dignify and glorify common labor and put brains and skill into the common occupations of life . . . No race can prosper till it learns that there is as much dignity in tilling a field as in writing a poem. It is at the bottom of life we must begin, and not at the top. Nor should we permit our grievances to overshadow our opportunities. . . .

. . . The wisest among my race understand that the agitation of questions of social equality is the extremest folly [mistake], and that progress in the enjoyment of all the privileges that will come to us must be the result of severe and constant struggle rather than of artificial forcing. . . . It is important and right that all privileges of the law be ours, but it is vastly more important that we be prepared for the exercises of these privileges. . . . 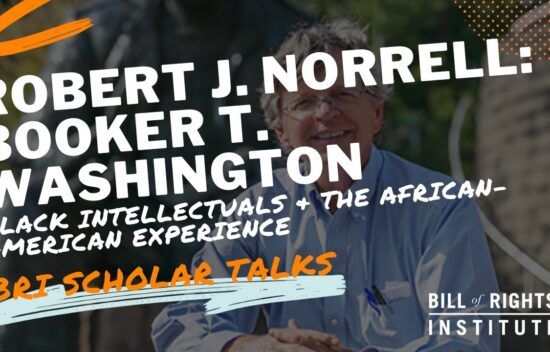 How did Booker T. Washington, prominent African American educator and intellectual, contribute to understanding the Black experience in America? In this episode of our Scholar Talk series "Black Intellectuals and the African American Experience," BRI Senior Teaching Fellow Tony Williams is joined by Robert J. Norrell, Professor of History & Bernadotte Schmitt Chair of Excellence, the University of Tennessee and author of "Up from History: The Life of Booker T. Washington." Together, they explore the educational ideas of Washington and the ways he challenged racial discrimination and contributed to American culture broadly. What educational ideas and civic virtues did Washington promote for Black advancement?