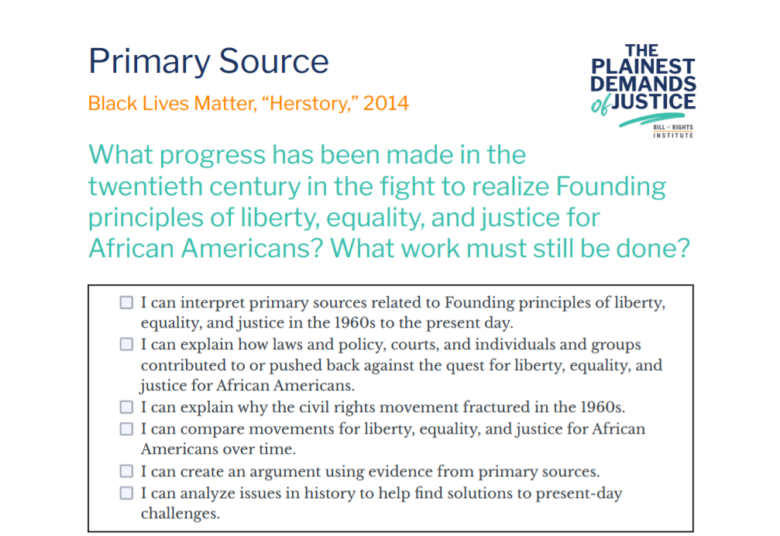 The Black Lives Matter movement was created in 2013 by Alicia Garza, Patrisse Cullors, and Opal Tometi as a response to the 2012 shooting of Trayvon Martin and subsequent acquittal of George Zimmerman, the accused shooter. The movement began as a social media hashtag, #BlackLivesMatter, and grew to national prominence after the death of Michael Brown in Ferguson, Missouri, a suburb of St. Louis, in 2014. After the 2020 death of George Floyd at the hands of police in Minneapolis, Minnesota, the movement led protests and demonstrations against police brutality worldwide. By calling the history of their movement “Herstory,” founders Garza, Cullors, and Tometi signal that they are placing women leaders at the forefront.

Black Lives Matter is an ideological and political intervention in a world where Black lives are systematically and intentionally targeted for demise. It is an affirmation of Black folks’ humanity, our contributions to this society, and our resilience in the face of deadly oppression. . . .

In 2014, Mike Brown was murdered by Ferguson police officer Darren Wilson. It was a guttural response to be with our people, our family—in support of the brave and courageous community of Ferguson and St. Louis as they were being brutalized by law enforcement, criticized by media, tear gassed, and pepper sprayed night after night. . . .We made two commitments: to support the team on the ground in St. Louis, and to go back home and do the work there. We understood Ferguson was not an aberration, but in fact, a clear point of reference for what was happening to Black communities everywhere.

It became clear that we needed to continue organizing and building Black power across the country. People were hungry to galvanize their communities to end state-sanctioned violence against Black people, the way Ferguson organizers and allies were doing. Soon we created the Black Lives Matter Global Network infrastructure. It is adaptive and decentralized, with a set of guiding principles. Our goal is to support the development of new Black leaders, as well as create a network where Black people feel empowered to determine our destinies in our communities.