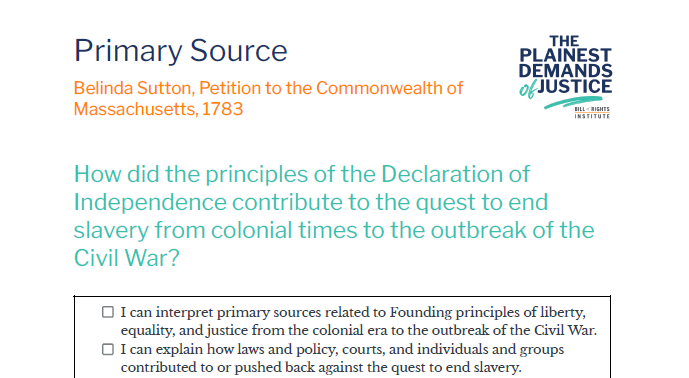 Belinda Sutton was an enslaved woman in the Royall household, the largest slaveholding family in Massachusetts. The Royall family amassed their fortune by trading sugar, rum, and slaves. During the American Revolution, Isaac Royall was a Loyalist and was therefore exiled by Massachusetts in the 1778 Act of Banishment. In 1783, Sutton petitioned the Commonwealth of Massachusetts for an income from his estate. This petition is among the earliest narratives by an African American woman.

Belinda Sutton, Petition to the Commonwealth of Massachusetts, 1783

The Petition of Belinda an Affrican, humbly shews: that seventy years have rolled away, since she on the banks of the Rio de Valta [the Volta River, in present-day Ghana], received her existence – . . . before she had Twelve years enjoyed the fragrance of her native groves, … an armed band of white men, driving many of her Countrymen in Chains, ran into the hallowed shade! . . . She was ravished from the bosom of her Country, from the arms of her friends – while the advanced age of her Parents, rendering them unfit for servitude, cruelly separated her from them forever!

Scenes which her imagination never conceived of, – a floating World – the sporting Monsters of the deep – and the familiar meetings of the Billows and the clouds, stove, but in vain to divert her melancholy [sad] attention, from three hundred Affricans in chains, suffering the most excruciating torments; and some of them rejoicing, that the pangs of death came like a balm to their wounds. Once more her eyes were blest with a Continent – but alas! How unlike the Land where she received her being! … she learned to catch the Ideas, marked by the sounds of language only to know that her doom was Slavery, from which death alone was to emancipate her . . . – the Laws had rendered her incapable of receiving property – and though she was a free moral agent, accountable for her own actions, yet she never had a moment at her own disposal!

The face of your Petitioner, is now marked with the furrows of time, and her frame bending under the oppression of years, while she, by the Laws of the Land, is denied the employment of one morsel of that immense wealth, apart whereof hath been accumilated by her own industry, and the whole augmented by her servitude.

WHEREFORE, casting herself at your feet if your honours . . . for the reward of Virtue, and the just return of honest industry – she prays, that such allowance may be made her out of the Estate of Colonel Royall, as will prevent her, and her more infirm daughter, from misery in the greatest extreme, and scatter comfort over the short and downward path of their lives.