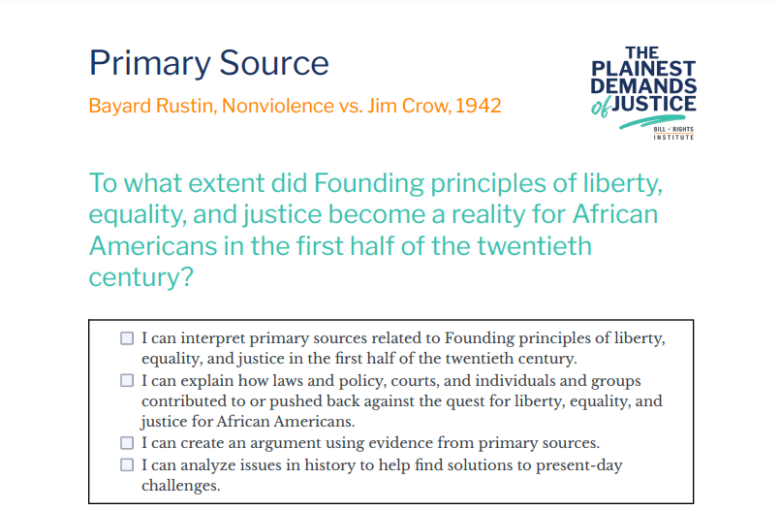 Bayard Rustin was a civil rights activist who believed in the power of nonviolence to achieve social change. He helped convince Dr. Martin Luther King, Jr., and other civil rights leaders of the moral and practical necessity of practicing nonviolence. Rustin was also a skilled strategist. He organized the highly successful March on Washington for Jobs and Freedom in 1963 – at which Dr. King made his famous “I Have a Dream” speech. In this essay written in 1942, Rustin describes how he used nonviolence to challenge segregation on a southern bus.

“I believe that I have a right to sit here,” I said quietly [to the bus driver and police officers]. “If I sit in the back of the bus I am depriving that child”—I pointed to a little white child of five or six—“of the knowledge that there is injustice here, which I believe it is his right to know. It is my sincere conviction that the power of love in the world is the greatest power existing. If you have a greater power, my friend, you may move me.”

How much they understood of what I was trying to tell them I do not know. By this time they were impatient and angry. As I would not move they began to beat me about the head and shoulders, and I shortly found myself knocked to the floor. Then they dragged me out of the bus and continued to kick and beat me.

Knowing that if I tried to get up or protect myself in the first heat of their anger they would construe it as an attempt to resist and beat me down again, I forced myself to be still and wait for their kicks, one after another. Then I stood up, spreading out my arms parallel to the ground, and said, “There is no need to beat me. I am not resisting you.”