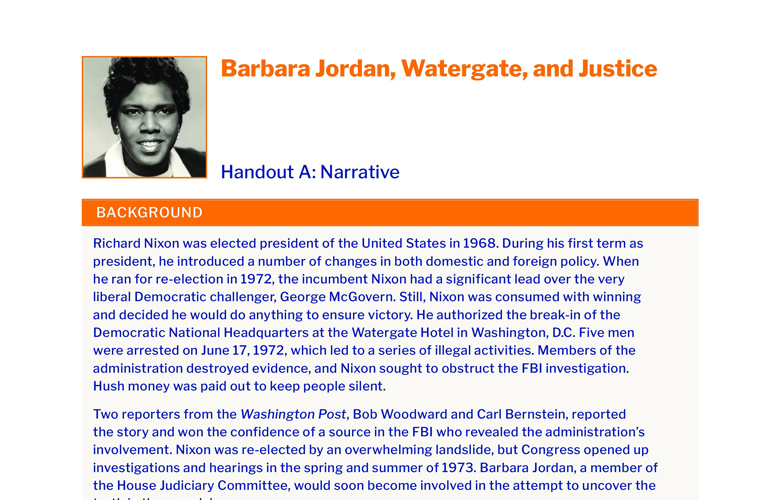 Richard Nixon was elected president of the United States in 1968. During his first term as president, he introduced a number of changes in both domestic and foreign policy. When he ran for re-election in 1972, the incumbent Nixon had a significant lead over the very liberal Democratic challenger, George McGovern. Still, Nixon was consumed with winning and decided he would do anything to ensure victory. He authorized the break-in of the Democratic National Headquarters at the Watergate Hotel in Washington, D.C. Five men were arrested on June 17, 1972, which led to a series of illegal activities. Members of the administration destroyed evidence, and Nixon sought to obstruct the FBI investigation. Hush money was paid out to keep people silent.

Two reporters from the Washington Post, Bob Woodward and Carl Bernstein, reported the story and won the confidence of a source in the FBI who revealed the administration’s involvement. Nixon was re-elected by an overwhelming landslide, but Congress opened up investigations and hearings in the spring and summer of 1973. Barbara Jordan, a member of the House Judiciary Committee, would soon become involved in the attempt to uncover the truth in the scandal.

Barbara Jordan was born in Houston, Texas on February 21, 1936. She possessed a strong desire to achieve academic success and graduated from Phyllis Wheatley High School with honors. She attended Texas Southern University, and then graduated from Boston University School of Law in 1959. Barbara Jordan achieved many successes as an African American woman. She was the first African-American to be elected to the Texas Senate after Reconstruction; the first black, female southern member of the U.S. House of Representatives; and the first African-American woman to address the Democrat National Convention, doing so in 1976 and then again in 1992.

Barbara Jordan chose law as a career because she wanted to fight injustice in the world. An opportunity to do just that presented itself when she was a freshman member of the U.S. Congress. The year was 1974, and there were almost constant revelations about the Watergate scandal being released every week. President Richard Nixon appeared to be involved in the shadowy break-in at the Watergate Hotel as well as the subsequent cover-up.

Jordan was a member of the House Judiciary committee that began to consider impeaching President Nixon. Normally, freshman members of Congress quietly receive their committee assignments and deferred to the more experienced members of Congress. However, Jordan believed Nixon acted unjustly and sought to remedy what she believed to be a usurpation of the Constitution.

In the summer of 1974, the House Judiciary Committee somberly confronted the grave task of considering significant presidential violations of the Constitution. The country was tense. Was President Nixon guilty of high crimes and misdemeanors against the United States?

In July, the thirty-five committee members transparently opened the hearings to the public. There was a formal recounting of the many misdeeds conducted by the administration. Then, Barbara Jordon took the podium. With deep resonance she stated, “My faith in the Constitution is whole, it is complete, it is total. I am not going to sit here and be an idle spectator to the diminution, the subversion, the destruction of the Constitution.” She also stated that if the Committee did not find the five articles of impeachment against Nixon, “compelling enough… then perhaps the eighteenth-century Constitution should be abandoned to a twentieth century paper shredder.”

Jordan’s stirring rhetoric, along with her skilled reasoning, elicited a frenzy of support for the impeachment of Nixon. Citizens across the United States respected Barbara Jordan and what they believed to be her convincing defense of constitutional principles and, most importantly, justice. Ultimately, the House Judiciary Committee agreed to three counts of impeachment: obstruction of justice, abuse of power, and contempt of Congress. The members also subpoenaed the recordings of Oval Office conversations that had a key section mysteriously missing. It was suspected that the section was erased to hide illegal wrongdoing.

After Nixon’s subsequent resignation from office, Barbara Jordan continued to be an avid civil rights activist and teacher. Jordan believed her calling was to defend one of the core principles of America—justice within the constitutional framework of the rule of law. In the wake of Watergate, she expressed her vision of a just America: “We only want, we only ask that when we stand up and talk about one nation under God, liberty, justice for everybody, we only want to be able to look at the flag, put our right hands over our hearts, repeat those words and know that they are true.” She dedicated herself to a career characterized by an unflinching quest for justice as a fundamental principle of America.