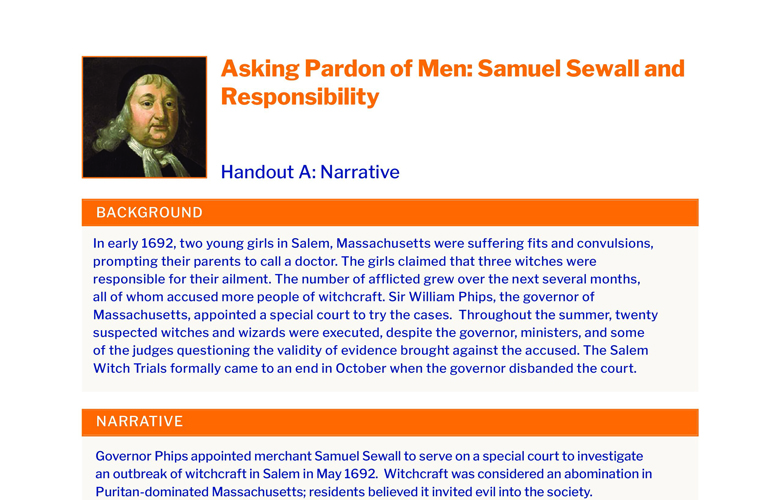 In early 1692, two young girls in Salem, Massachusetts were suffering fits and convulsions, prompting their parents to call a doctor. The girls claimed that three witches were responsible for their ailment. The number of afflicted grew over the next several months, all of whom accused more people of witchcraft. Sir William Phips, the governor of Massachusetts, appointed a special court to try the cases. Throughout the summer, twenty suspected witches and wizards were executed, despite the governor, ministers, and some of the judges questioning the validity of evidence brought against the accused. The Salem Witch Trials formally came to an end in October when the governor disbanded the court.

Governor Phips appointed merchant Samuel Sewall to serve on a special court to investigate an outbreak of witchcraft in Salem in May 1692. Witchcraft was considered an abomination in Puritan-dominated Massachusetts; residents believed it invited evil into the society.

Sewall was a successful merchant and possessed a high social standing as a community leader. He was an immigrant from England who attended Harvard College and graduated with a bachelor’s and a master’s degree in divinity. Sewall married the daughter of a wealthy merchant and soon inherited the business. Sewall was also a highly devout Puritan who was accepted as a member of Old South Church. He read the Bible daily, hosted prayer meetings in his home, served the music ministry, and baptized his own children.

Sewall also saw himself as one of the guardians of social order; he frequently complained in his diary about the decline of public morality. Sewall served in many civic offices including official printer of the colony, a representative in the Massachusetts assembly, a captain of the militia, an overseer of Harvard, and a night watchman to enforce Boston’s curfew.

The trials that Sewall helped oversee were controversial from the beginning. Many of the afflicted girls who made accusations submitted “spectral evidence.” This included visions and sounds that had no physical evidence of occurring. The accusers claimed they came from the spiritual world. Amid the growing hysteria over the possibility of witches living in the community, the court accepted spectral evidence. Many of the accused would be condemned to death based on invisible evidence that could not be proven or disproven.

Jails were jammed with suspected witches, and executions continued in June, July, and August. In July, a woman who was found guilty named Sarah Good told Sewall, “I am no more a witch than you are a wizard. If you take my life away, God will give you blood to drink.”

Multiple pastors spoke out against the unfair trials as the number of accused continued to grow. Chief Justice Saltonstall resigned from the court in disgust, but the rest of the body still sentenced more than a dozen witches to be executed in August and September.

In October, the trials finally came to a halt. Too many people were accused of witchcraft to be reasonable, and the accusations had reached the pious and wealthy, including the governor’s
wife. Governor Phips disbanded the court and relieved Sewall of his duties. The Massachusetts assembly called for a “day of fasting and prayer” for divine guidance and reflection about the trials.

Sewall recoiled in horror at what he had done and was tormented for years by the guilt. Five years later, he willingly accepted responsibility for his actions. On January 14, 1697, he entered Third Church to honor a “day of fasting and prayer.” After the congregation sang a psalm, the minister walked to the pulpit, only pausing to receive a note from Sewall. The repentant merchant rose silently and stood with his head bowed while the minister read his public apology. Sewall’s note stated that he “[desired] to take the blame and shame of [the trials].” He “[asked] the pardon of men, and especially [desired] prayers for God.” He begged God to forgive him for all of his sins, bowed deeply to his fellow congregants, and sat.

Sewall had participated in an injustice in 1692 but later accepted responsibility for his actions. He was the only judge from the special court to publicly apologize for the role he played in the witchcraft trials.