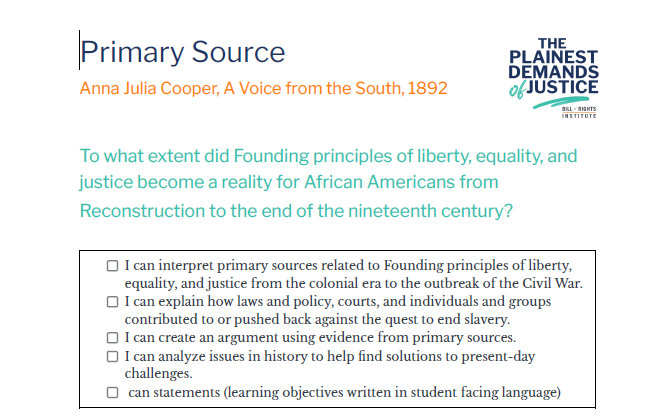 Anna Julia Cooper was born into slavery in North Carolina in 1858. She received a scholarship to a prestigious school in Raleigh after the Civil War and later attended Oberlin College, receiving a degree in mathematics. She became an educator at a school for Black children in Washington, DC, and under her leadership, the school became the famous Dunbar High, a model of education for Black students. Cooper became a public speaker and author who focused on the double burden of racism and sexism experienced by Black women. She became an advocate of elevating the position of all African Americans by educating Black females. This goal was tied to her larger vision of ensuring that all humans enjoyed their rights and dignity.

Anna Julia Cooper, A Voice from the South, 1892

. . . There was never a time since America became a nation when there were not more than one belief contending for supremacy. Hence no one is or can be supreme. All interests must be consulted, all claims conciliated. . . . Compromise and concession, liberality and toleration were the conditions of the nation’s birth and are the sine qua non [essential for] of its continued existence. A general amnesty [permission to act with liberty] and universal reciprocity [mutual benefit] are the only modus vivendi [way of living] in a nation whose every citizen is his own king. . . .

The supremacy of one race,—the despotism [unjust power] of a class or the tyranny of an individual can not ultimately prevail on a continent held in equilibrium by such conflicting forces and by so many and such strong  fibred races as there are struggling on this soil . . . Men will here learn that a race, as family, may be true to itself without seeking to exterminate all others. That for the note of the feeblest there is room, nay a positive need, in the harmonies of God. That the principles of true democracy are founded in universal reciprocity, and that “A man’s a man” was written when God first stamped His own image and superscription [written on the surface] on His child and breathed into his nostrils the breath of life. And I confess I can pray for no nobler destiny for my country than that it may be the stage, however far distant in the future, whereon these ideas and principles shall ultimately mature . . . 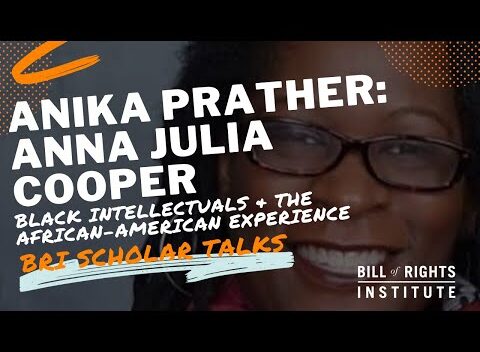 What contribution did Anna Julia Cooper, prominent African-American author and educator, make to understanding the Black experience in America? In this episode of our Scholar Talk series "Black Intellectuals and the African American Experience," BRI Senior Teaching Fellow Tony Williams is joined by Anika Prather, Professor of English at Howard University, to discuss the unique ways Cooper advocated for equal educational and economic opportunities of Black Americans. As a high school teacher and college professor at Black institutions, how did Cooper use Founding principles of equality and dignity to empower others?