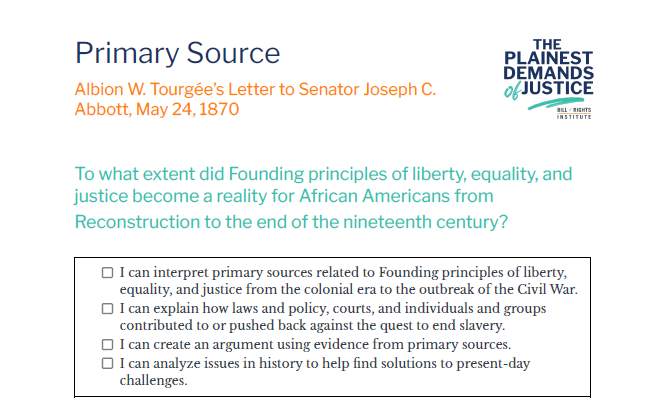 Albion Tourgée was a noted lawyer, writer, and politician. After the Civil War, he moved to North Carolina where he established himself as a lawyer and editor of a Republican newspaper. Tourgée was a pioneer civil rights activist who wrote about and exposed Klan atrocities, and he later served as Homer Plessy’s chief attorney in the landmark Plessy v. Ferguson case argued before the Supreme Court.

The following letter to the North Carolina governor from an African Methodist Episcopal (A.M.E.) pastor and teacher describes the violence in his local community in Hillsboro.

It is my mournful duty to inform you that our friend John W. Stephens, State Senator from Caswell, is dead. He was foully murdered by the Ku-Klux in the Grand Jury room of the Court House on Saturday or Saturday night last. . . . He was one of the Justices of the Peace in that township, and was accustomed to hold court in that room on Saturdays. It is evident that he was set upon by some one while holding this court, or immediately after its close, and disabled by a sudden attack, otherwise there would have been a very sharp resistance, as he was a man, and always went armed to the teeth. He was stabbed five or six times, and then hanged on a hook in the Grand Jury room, where he was found on Sunday morning. Another brave, honest Republican citizen has met his fate at the hands of these fiends. . . .

These crimes have been of every character imaginable. Perhaps the most usual has been the dragging of men and women from their beds, and beating their naked bodies with hickory switches. . . . From 50 to 100 blows is the usual allowance, sometimes 200 and 300 blows are administered. Occasionally an instrument of torture is owned. . . .

I could give other incidents of cruelty, such as hanging up a boy of nine years old until he was nearly dead, to make him tell where his father was hidden, and beating an old negress of 103 years old with garden pallings [fencing around a garden] because she would not own that she was afraid of the Ku-Klux. . . .

Four thousand or 5,000 houses have been broken open, and property or persons taken out. And yet the Government sleeps. I am ashamed of the nation that will let its citizens be slain by scores, and scourged by thousands, and offer no remedy or protection.