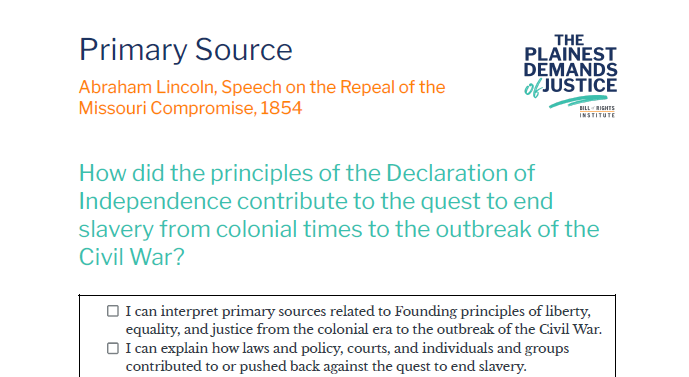 The Kansas-Nebraska Act further divided the country over slavery. Former Representative Abraham Lincoln was an attorney who was deeply involved in politics and who gave the following commentary on the bill’s passing. He was greatly roused by the act for reversing the Missouri Compromise and spreading the evil of slavery to the territories. He participated in the creation of the new Republican Party, dedicated to curbing the westward expansion of slavery, and was elected president only six years later.

Speech on the Repeal of the Missouri Compromise, 1854

This declared indifference, but as I must think, covert real zeal for the spread of slavery, I can not but hate. I hate it because of the monstrous injustice of slavery itself. I hate it because it deprives our republican example of its just influence in the world — enables the enemies of free institutions, with plausibility, to taunt us as hypocrites — causes the real friends of freedom to doubt our sincerity, and especially because it forces so many really good men amongst ourselves into an open war with the very fundamental principles of civil liberty — criticizing the Declaration of Independence, and insisting that there is no right principle of action but self-interest.