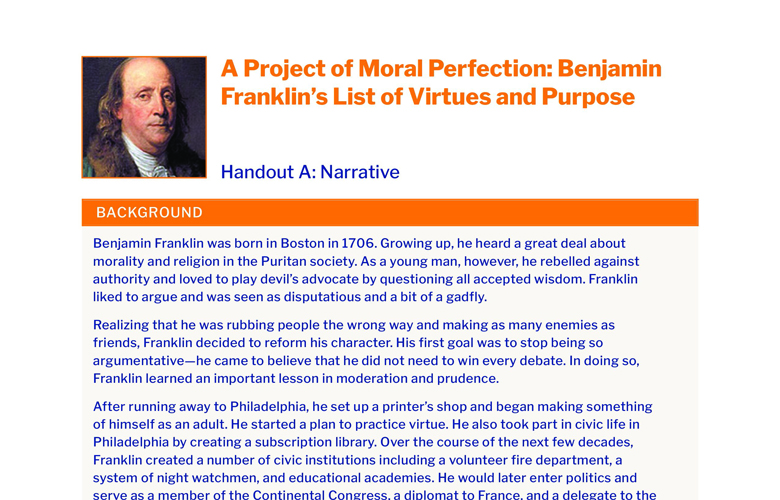 Benjamin Franklin was born in Boston in 1706. Growing up, he heard a great deal about morality and religion in the Puritan society. As a young man, however, he rebelled against authority and loved to play devil’s advocate by questioning all accepted wisdom. Franklin liked to argue and was seen as disputatious and a bit of a gadfly.

Realizing that he was rubbing people the wrong way and making as many enemies as friends, Franklin decided to reform his character. His first goal was to stop being so argumentative—he came to believe that he did not need to win every debate. In doing so, Franklin learned an important lesson in moderation and prudence.

After running away to Philadelphia, he set up a printer’s shop and began making something of himself as an adult. He started a plan to practice virtue. He also took part in civic life in Philadelphia by creating a subscription library. Over the course of the next few decades, Franklin created a number of civic institutions including a volunteer fire department, a system of night watchmen, and educational academies. He would later enter politics and serve as a member of the Continental Congress, a diplomat to France, and a delegate to the Constitutional Convention.

In the late 1720s, a young Philadelphia printer sat down at a table by candlelight and opened up a small leather book. Benjamin Franklin began to plan what he called a “bold and arduous Project of arriving at moral Perfection.” He was not a struggling man who was trying to turn his life around after a series of bad decisions; in fact, Franklin had recently married and was a successful printer who was committed to serving the community as an emerging civic leader. With a few fits and starts, he jotted down twelve virtues that he would try to follow.

Franklin’s list included temperance, silence, order, resolution, frugality, industry, sincerity, justice, moderation, cleanliness, tranquility, and chastity. When he shared his list with a friend of his, Franklin was rankled to learn that many people thought him proud. As a result, he added humility to the list. Franklin planned to fix his attention on one virtue at a time so that he could “be Master of that” before moving on to the practice of another virtue. He would spend a week on each virtue, and then go down the list in thirteen weeks before starting over again. Thus, Franklin could cycle through the list four times a year as he set out to mold his character. Franklin believed this would be a prudent approach rather than tackling all his vices at once, stating, “Like him who having a Garden to weed, does not attempt to eradicate all the bad Herbs at once, which would exceed his Reach and his Strength, but works on one of the Beds at a time, and having accomplish’d the first proceeds to a second.”

Franklin’s plan of moral perfection was not original; the foundation of this idea stretched back to Enlightenment ideas, Aristotle and the Ancient Greeks, Roman philosophers, and the Bible. These sources agreed that good character is formed by the practice of virtue and bad character by the practice of vice. Over time, the practice of virtue or vice becomes ingrained in one’s habits, which are hard to break. “My intention [is] to acquire the Habitude of all these Virtues,” Franklin wrote, emphasizing the habitual aspect. He attempted to gain mastery over his vices and passions as he governed himself. This self-mastery, Franklin believed, would lead to true happiness rather than the fleeting pleasure and unfortunate consequences of vice. This was an important concept to practice in a self-governing society such as the American colonies, as a representative government would only work with a good and virtuous citizenry.

Franklin began his plan and was supported by his friends and his wife, Deborah. He was diligent about launching his project and kept track of his failures in his book. Franklin was a little disappointed by what he discovered about himself. “I was surpris’d to find myself so much fuller of Faults than I had imagined,” he wrote. However, this feeling was soon outweighed by “the Satisfaction of seeing them diminish.” Franklin was tripped up most by his failures to achieve order, especially in his business where he needed to juggle between printing, meeting with customers, and organizing all his paperwork. However, he kept at his project and worked hard to improve his character for his own happiness as well as to help create a better society in Philadelphia.

While Franklin later admitted that over time he only went through the list of virtues once per year, and later only once every few years because of his significant public responsibilities as a diplomat and statesman, he defended the utility of his plan of moral perfection. In his Autobiography, he stated that he “never arrived at the Perfection [he] had been so ambitious of obtaining,” and, indeed, “fell far short of it.” However, he found it to be very worthwhile. Franklin had learned a valuable lesson about character at a relatively young age. The endeavor was a great success, he wrote, as it made him “a better and happier Man than [he] otherwise should have been, if [he] had not attempted it.”

Franklin’s sense of purpose reaped excellent rewards as he became one of the most highly respected and successful diplomats and statesmen of the Founding era. He was well-liked for his amiability, moderation, and civility, and he used these virtues to benefit his country.

Franklin’s character made him an especially effective diplomat in France during the 1770s and 1780s. There, during the Revolutionary War, Franklin brokered an alliance with the French as well as a final peace treaty with the British. The French people adored him and put his image on china, medallions, and prints. Whereas John Adams struggled in his diplomatic mission in France because of his combativeness, Franklin was more successful because of his affability.

Franklin’s character even helped to shape the Constitutional Convention. He counseled moderation when the delegates were heatedly deadlocked and used vignettes to illustrate his point. One story he told warned of a two-headed snake that was caught up on a stick and could not move because neither one wanted to compromise. On the last day of the Convention, Franklin urged each of his fellow delegates to sign the Constitution and “doubt a little of his own
infallibility.” He called for humility in the face of the monumental task before them.

When he died in 1790, Franklin had achieved the purpose he sought. He was not perfect, but he had lived a life trying to improve his moral character. The plan he conceived in his early twenties had served noble purposes: it made him a better person, helped him be successful as a statesman during the American Founding, and had helped contribute to making the world a better place.