From 1920 to 1938, the NAACP flew a flag outside its headquarters on Fifth Avenue in New York City. By marking one of the city’s busiest streets with this message, the NAACP hoped to bring attention to unprosecuted murders. The flag was removed in 1938 to resolve a dispute with the landlord. 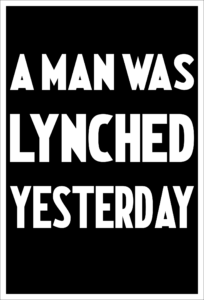