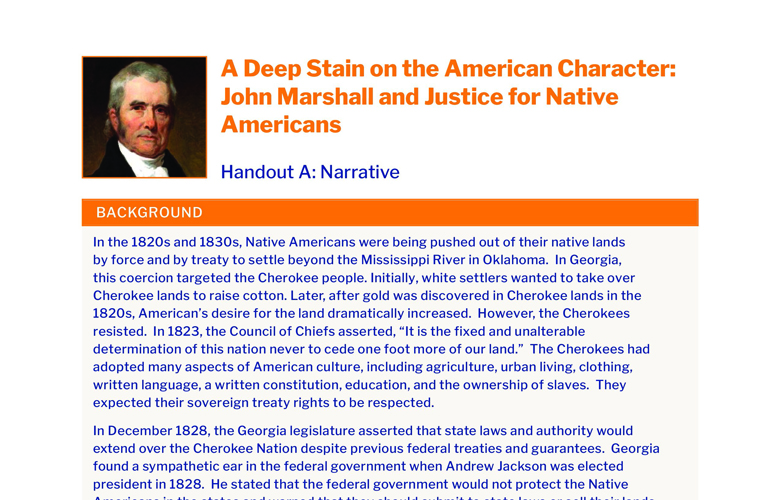 In the 1820s and 1830s, Native Americans were being pushed out of their native lands by force and by treaty to settle beyond the Mississippi River in Oklahoma. In Georgia, this coercion targeted the Cherokee people. Initially, white settlers wanted to take over Cherokee lands to raise cotton. Later, after gold was discovered in Cherokee lands in the 1820s, American’s desire for the land dramatically increased. However, the Cherokees resisted. In 1823, the Council of Chiefs asserted, “It is the fixed and unalterable determination of this nation never to cede one foot more of our land.” The Cherokees had adopted many aspects of American culture, including agriculture, urban living, clothing, written language, a written constitution, education, and the ownership of slaves. They expected their sovereign treaty rights to be respected.

In December 1828, the Georgia legislature asserted that state laws and authority would extend over the Cherokee Nation despite previous federal treaties and guarantees. Georgia found a sympathetic ear in the federal government when Andrew Jackson was elected president in 1828. He stated that the federal government would not protect the Native Americans in the states and warned that they should submit to state laws or sell their lands and move beyond the Mississippi. Jackson also authored the Indian Removal Bill to buy Native lands and relocate them out West. Congress passed the bill in 1830, and Jackson signed it into law.

In March 1831, Chief Justice of the Supreme Court John Marshall had several reasons to be despondent. Physically, he was seventy-six years old and feeling his age as it was becoming increasingly difficult to take his morning walk before he started his long day of judicial work. He was in constant pain and doctors diagnosed him with bladder stones, which made walking even more difficult and riding in a carriage nearly impossible. Politically, Marshall opposed the presidency of Andrew Jackson. Jackson was a Democrat who opposed the Bank of the United States and using federal funds for internal improvements on roads and canals. Instead, Jackson believed that the national government had no authority on these issues and thought the states should handle them. Marshall wished to retire from the Supreme Court but did not want President Jackson to appoint his successor. Another key issue on which Marshall disagreed with the president was the treatment of Native Americans.

With a majority in Congress, President Jackson and several states began forcing Natives off their lands and removing them west of the Mississippi River. Marshall was appalled by the injustice and oppression. He stated that the time had come “to give full indulgence to those principles of humanity and justice which ought always to govern our conduct towards the aborigines when this course can be pursued.” He hoped that the oppression of “a helpless people depending on our magnanimity and justice for the preservation of their existence, impresses a deep stain on the American character.” Marshall was a firm believer in the treaty rights and natural rights of Native Americans and that citizens and government had an obligation to protect those rights rather than violate them.

A showdown in the Supreme Court was inevitable as events in Georgia came to a head over the previous two years. In December 1828, the Georgia state legislature, with the support of the governor, had resolved that it would no longer obey federal law and treaties related to Native Americans within its border. The Cherokees hired noted attorneys John Sergeant and William Wirt to file suit on their behalf in the Supreme Court.

On March 5, 1831, Wirt delivered an eloquent statement of Native rights in arguments before Marshall and the other justices on the Court. Georgia, for its part, did not send attorneys to appear before the Court. The outcome, however, was surprisingly unfavorable for the Cherokees and seemed to belie the principles that Marshall privately asserted about justice and humanity for Native Americans. Marshall spoke for the Court in the shocking 4-2 Cherokee Nation v. Georgia (1831) decision. He argued that the Cherokee Nation and other tribes were “domestic dependent nations” rather than foreign nations. Thus, it could not sue in court. Moreover, Marshall declared in the opinion that the Cherokees were asking the Court to intercede in a political question rather than a judicial one, which it refused to do.

Chief Justice Marshall, however, was sympathetic to the plight of the Cherokees. He wrote, “If courts were permitted to indulge their sympathies, a case better calculated to excite them can scarcely be imagined.” However, Marshall decided cases upon the law and Constitution rather than personal preferences. Most importantly, he left the door open for justice through a better constitutional test of Georgia’s actions when he hinted that there should be a “proper case with proper parties.”

Meanwhile, the state of Georgia flaunted its assertion of complete sovereignty over Cherokee lands. A Cherokee named Corn Tassel was accused of murdering a fellow tribesman on Cherokee territory and was arrested and tried by Georgia officials. Attorney William Wirt was hired again and objected before the Supreme Court. Wirt argued that Cherokee courts ought to try Corn Tassel; Georgia again did not bother to appear at the Court. Despite the Supreme Court demanding a postponement on the execution in order for a ruling to be made, Georgia state authorities hung Corn Tassel.

In January 1831, as the Cherokee Nation case was coming to the Court, events in Georgia were leading to another case. Two Christian missionaries, Samuel Worcester and Elizur Butler, were arrested, jailed, and sentenced to four years hard labor for defying a new state law. The Georgia state legislature had recently passed a law banning missionaries from Cherokee lands because of the sympathy they had for the Cherokees and their opposition to state and federal policy towards the Cherokees. The governor offered a bribe of a pardon if they left the territory, but they refused. He also launched a wave of intimidation against female missionaries, but they also refused to be cowed.

That fall, Marshall survived bladder surgery (without anesthesia) to remove the stones that afflicted him. Tragically, however, his beloved wife died on Christmas Day, and he fell into a deep depression. Nevertheless, when the Court heard arguments in the case of the detained missionaries, Marshall mustered the strength to do justice on behalf of the Cherokee Nation.

In March 1832, Chief Justice Marshall spoke once again for the majority of the Court to a packed courtroom. Also in attendance were members of Congress, newspaper reporters, Cherokee chiefs, and many spectators, attending to hear what the great man would rule. “The mild voice of the aged Chief Justice sounded through the Court,” one observer noted. In Worcester v. Georgia (1832), the Court decided that Worcester was “under the guardianship of treaties” and that the state laws were “repugnant to the Constitution, laws, and treaties of the United States.” The Native tribes “had always been considered as distinct, independent political communities, retaining their original natural rights, as the undisputed possessors of the soil from time immemorial.” Therefore, the laws of Georgia “have no force,” and the missionaries had to be released.

Georgia, however, did not immediately release the prisoners. The Court could not address their release until early 1833 when it was in session again, and President Jackson refused to intervene. Indeed, he reportedly said, “John Marshall has made his decision, now let him enforce it.” Whether or not Jackson said it, the quote was consistent with his policy. The missionaries were released when they asked for a pardon and Georgia subsequently revoked the law.

Chief Justice John Marshall acted with integrity for justice in the two cases related to the Cherokee Nation in Georgia, even though the two cases had different outcomes. He supported acting humanely towards Native Americans even when it was not popular, but he recognized the need for preserving justice. Marshall understood that his rulings would establish a precedent that would have force long after he left the court. In doing so, he achieved justice, not only for his generation but for those yet unborn.